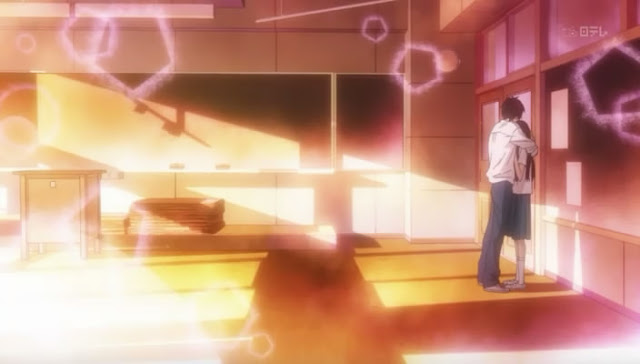 Rejoice, all you Sawako and Kazehaya shippers – this time has arrived. I think so. Am I celebrating a little too early? Anyways, the misunderstandings has been cleared. Both of the previously clueless beings are currently eagerly anticipating the arrival of a new day. So am I. Tee-hee! I can’t wait for next week’s episode to see them finally, officially like really, really TOGETHER. It’s been so long. Almost 30 episodes, if I’m to include the first season? Probably more. (Lazy to really do the math right now)

Once again, I enjoy the music playing at the first half of this week’s episode. I also enjoy all the “fuwa-fuwa”-ness of the art. Maybe cuz Kimi ni Todoke has made me such a happy girl so everything looks good this week. More actions this week. As in, it isn’t just monologues or reflection of the pass and whatnot. There were more interactions this week. How could it be not? Sawako was confessing to Kazehaya here!! Less about the festival this week, but the festival in Kitaro High is still ongoing. I’m so jealous of them. They get to play at school. Erm..not that I didn’t. Haha.

Suddenly, a thought occurred to me. One of the anime I saw, but I can’t for the life of me I can’t remember which one, mentioned something about seeing new couples emerging during school festivals and trips. Well, here it is – Sawako and Kazehaya together officially during a school festival. Just a random thought here. =)

K, enough of them!

I just love Ryu. He’s just so adorable. I can’t believe he did that to Joe. “Where’s Kazehaya?”. “Hehe”. “Where’s Kazehaya?” “Hehe”. I was laughing at that scene. Hard. Ryu – he’s just so different and has his own way of dealing with things. Oh, I’m obliged to mention Pin in this post. Although he’s such a pain in the ass, but sometimes he says pretty smart things. What he said to Sawako, about everyone has hidden desires and all – that’s good. I mean, Sawako needs to know that it’s normal to be feeling what she’s feeling at the moment. She needs to know that she’s normal. With those words coming from Pin, I think it’s hard NOT to believe it. Pin isn’t friend. He won’t try to be nice to you, and tell you sweet lies just to make sure your feelings aren’t hurt.

There are like a million things going through my head right now. What will happen to Kurumi in the future now that there’s 99.99% chance that Sawako and Kazehaya will be together? Also, once Sawako and Kazehaya are officially an item, will the focus move to Ryu and Chizu? They ought to be together, you know. Then, where will Kento come in? With Ayane or just one of those background characters? I’m sure Kento’s character will be further developed into well, something. Just that I don’t know what. Yet.

Sigh. I still have this slight hope that Kimi ni Todoke will be extended, but I know this won’t happen. I just want to see more of it, that’s all.