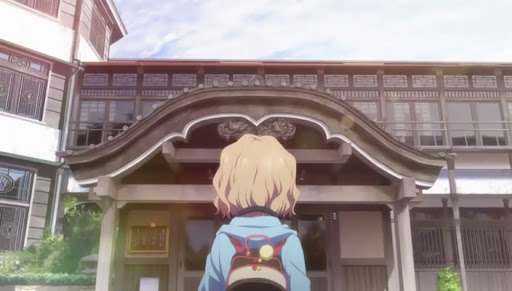 I am blown away by the artwork. Absolutely blown away. This series wasn’t on my to-watch list. I read a few reviews about it and they are generally positive so I decided to give it try. I was already blown away when I saw the screenshots, but now that I’ve watched it personally, I’m utterly speechless. It’s just so beautiful. It’s very detailed. I like how they took the effort to draw and color each shots so beautifully. I’m truly impressed. Truly, truly impressed.

Okay, I sounded like I might continue watching this series only cuz the art is amazingly pretty. But it is. It is that pretty. Omg, I’m..never mind – if I continue on, I’ll never stop gushing about the prettiness of the series.

It is the first episode, so I’m just going to quickly go through what has happened and my expectations for it. So what has happened? To make it short and sweet, Matsumae Ohana had to live with her grandma as her mother fled off to some unknown place to avoid the debt.

Now, the first episode has quickly introduced some of the major characters that will be on the show. We have rough ideas who they are – their facade at least. We have Minko whose favorite word is “die”, Nako who seems to be living in her own world, and last but not least, Ohana who’s struggling to find a place she belongs to.

Believe it or not, I like Ohana’s grandma. She has this stern, devilish don’t-mess-with-me look. She reminded me of the evil Cruella De Vil from 101 Dalmatians. Don’t ask me why. Maybe it’s the vibe….And grandma has this air of authority around her.

Of course I like Ohana’s character too. Otherwise, I won’t contemplate following series and perhaps do episodic reviews on it. From my point of view, Ohana’s a lot mature than a lot of teenage girls. She might not be actively planning for her future, but the girl knows what she wants and is pretty confident that she can achieves them. Being devoid of mother’s care, she has learn to take care of herself. The tears at the last few minutes of this episode marked the beginning of her new, bumpy journey. I think the first episode did well enough to make me wanna stick around and find out what will happen to our lovely lead character here.

Plus, I love the art (yeah, I know. I said it again). I wish for it to be consistent throughout the whole series. It just sooo pretty. Before you ask me to shut up, allow me to show you why I think it’s pretty. I know P.A Works do pretty, but this is beyond what I expect. So I’m happy. I’m going to show you the part I like best, which is when Ohana reached the inn. The building’s just magnificent. 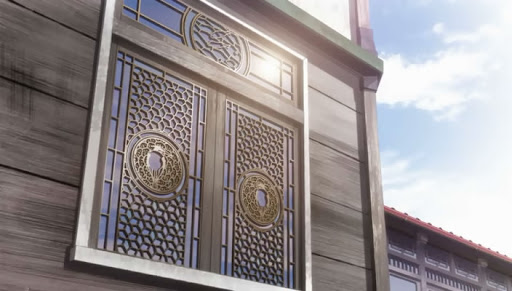 Look at the details on the windows! 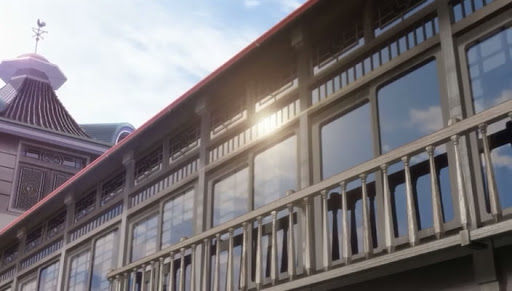 On a side note, when Ohana’s mother fled, I asked myself one question. It is a question that has been with me for a while now. Why is it that a lot of anime portrays teenagers living on their own or with grandparents? I’ve never been to Japan and I don’t have friends living in Japan. I don’t really know if cases like this are normal over there. But it happens a lot in anime. Is it cuz it’s easier to develop a story now that the parents are out of the picture or what? Hmm…..

Say, what to do you know. Hanasaku Iroha is a series I wasn’t planning to watch, but here I am gushing about it already. Huh.