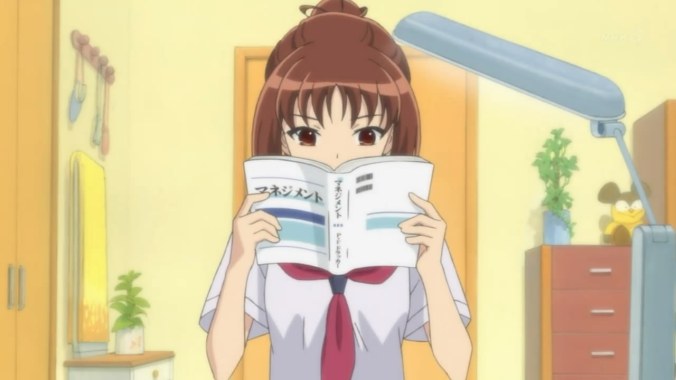 The story follows Minami Kawashima who, as a favour to her childhood friend, Yuki Miyata, takes over as manager for the Hodokubo High School Baseball team when she is hospitalized with an illness. With no previous experience managing a team, Minami ends up picking up a copy of Peter Drucker’s business management book, Management: Tasks, Resposibilities, Practices, and starts to manage the baseball team like one would manage a business, with the goal of reaching the nationals.

I have just recently completed the short series, Moshidora, which tells a story about a high school student who takes on the role as a baseball manager. Moshidora is one of the anime I’ve been looking forward this spring anime season, and I’m glad this turned out goooood.

This series only has ten episodes, but I think it did enough to capture the audience. It kept me glued to my screen, eagerly waiting to know how the story will continue. Having all the ten episodes ready before I start watching helps a lot in that sense. It eases the pain of waiting. >.<

Who would ever thought an anime will use theories suggested by the renown business figure, Peter Drucker, to write its story? Drucker is no stranger to me, having read some of his material when I was doing my postgraduate studies. I must’ve referenced his works in a lot of my management studies but to think he’ll also be referenced in an anime – that feeling is indescribable.

Moshidora, to me, guides the audience step by step, watching how the baseball team manage to morph into champions within one short year. I think Minami and the rest of the management team did a great job in applying what they’ve read. Even though Minami is stepping in for her dear friend Yuki, she did her job wholeheartedly. She is very dedicated and constantly thinking of ways and ideas to improve her team.

Each and every baseball players have been such an inspiration. I love their teamwork. They stick together through thick and thin, and always look out for each other. When their team members make mistakes, they are not quick to point fingers. For example, it’s so easy to lash out on Yūnosuke for making errors in all the critical games, but his team members work together to erase his errors. That’s one of the thing I like about the team. And their unity is the core of their success. Besides that, some of the members were also working really hard to treasure the present moment and make the most of it so that there’ll be no regrets in the future. Nikai would be the best example. He’s been a bench-warmer, but after seeing how things has changed for the baseball team he decided that he’s not going to live with regrets and contributed what he knows best. Eventually his efforts was recognized and was elected as a captain. That moment was truly magical.

Moshidora isn’t just about winning games and ironing out a perfect strategy. It’s also about the close friendship Minami shares with Yuki. It’s absolutely terrible and sad to see Yuki died before the nationals. Somehow I knew that’s going to happen. Yuki’s body language when she’s telling Minami how process is more important than result (which I totally agree) suggested that she’s at her limit. I was thinking she might tell Minami that her surgery wasn’t successful or whatnot. She never told Minami anything. Her death must’ve hit Minami really hard as it’s just too sudden. Although I knew Yuki was going to die, when it happened it still stings.

This show might be all about management but Minami isn’t just a successful manager but a great leader. Not all managers are leaders. Minami is. She’s able to motivate the team, lend a listening ear, look at a big picture, inspire the team. She’s initiative and compassionate. These are all qualities of a good leader. The baseball team never dared to dream about going to nationals. With Minami leading them, they do what they never could’ve imagined.

If I may say so, I think Moshidora is a great example to show how management can be done. It depicted most, if not all, of the fundamental elements in building a team (or an organization). People is the greatest asset, thinking outside the box, having measurable, defined objectives and whatnot. I always like using visuals, be it slide shows, pictures and so on, to help me remember and understand things better. Who knows, maybe a viewer is able to recall what Minami did and applied what he/she is managing at work/school. It could happen right?

Anyways, Moshidora is a great show. Pick it up if you haven’t. =)