The anime industry is full of talented seiyū. Be it veterans or newcomers, they have this cunning ability to catch you off guard at times. Meaning to say, you can never guess it is he or she who breathe life into the 2D characters. I have encountered many jaw-dropping experiences myself. I lost count the number of times it happened. However, I remember clearly my first surprise.

You see, I was never really into knowing about voice actors. I was only interested how will a story be delivered so I never bothered to check out the cast. Then came one day when I was told the voice actor for Naruto‘s Gaara and Bamboo Blade‘s Dan-kun is one and the same person. Ishida Akira. 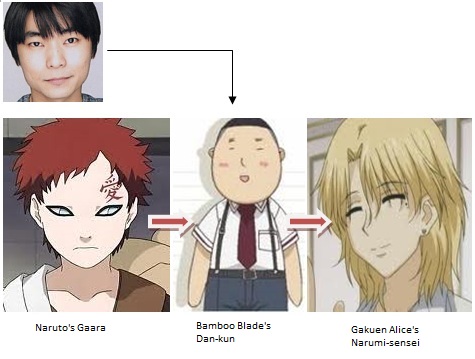 some of Ishida Akira’s work I saw

Gaara is my favorite Naruto charater. Dan-kun is my least favorite character in Bamboo Blade. It doesn’t have anything to do with looks and character personality here. I simply dislike Dan-kun’s monotonous voice. It’s putting me to sleep. I know Gaara can be monotonous, but at least his voice is deep and I think the character calls for it. Gosh, I’d love link some video of these portrayals – especially Dan-kun’s – but at the time of writing, YouTube keeps crashing on me. Ugh! Anyways, after this incident I’ve started paying more attention to the seiyū.

Next up, I get to know who Satō Satomi is after reading a post in Danny Choo’s blog here. I was delighted to know that she’s the voice actress for K-ON’s Ritsu, which is also one of the reason I remember her name. By now, I’ve already started taking interest in knowing who’s behind a character. Since I recognized OreImo’s Kirino’s voice as K-ON’s Azu-nyan’s, I searched for the cast list for confirmation. However, I was in for a surprise. Along with Taketatsu Ayana’s name is Satō Satomi’s. She plays Kirino’s brother’s childhood friend, Manami. Her voice – it’s such a huge difference is compared to Ritsu’s! 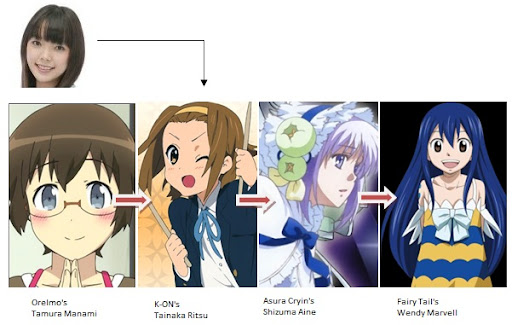 some of Satō Satomi’s work I saw

Just so you know, recently I read the winner list for the 5th Annual Seiyū Award and was happy to know that Satō-san has won The Best New Actress award. Being happy is one thing when I read that list. Being surprised by yet another seiyū is another thing. The person responsible for it is the voice actor for both Kaichou wa Maid-sama‘s Usui Takumi and Bakuman’s Niizuma Eiji – Okamoto Nobuhiko. For those who watched Bakuman would agree with me that Eiji is an interesting character with an annoying voice. I can’t believe it’s the same person! Karasu! (a word closely related to Eiji) 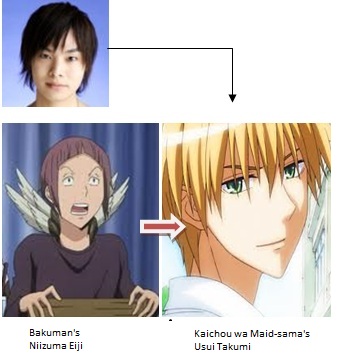 some of Okamoto Nobuhiko’s work I saw

So far the people I’ve written about in this post only voiced characters of same gender. I’m sure most of you, if not all, must’ve already known that some characters are voiced by seiyū of opposite sex. The most notable person is Takeuchi Junko. She’s given voice to Naruto’s Uzumaki Naruto, Hunter X Hunter’s Gon, and most recently One Piece’s Sabo. If I hadn’t check out her name, I wouldn’t have known it’s a woman behind these three young male characters. Wicked huh? 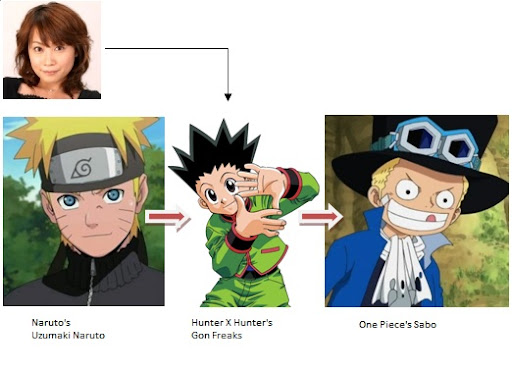 some of Takeuchi Junko’s work I saw

These are just a few seiyū that caught my eye. I’m sure there are a lot more talented seiyū out there. It’s only the matter of time before they come to my attention. I’m aware that being able to provide different form or range of voices doesn’t make a seiyū extraordinary. It’s only one of the criteria. It’s equally important that they’re able to portray the characters as intended by the creator. Delivering the exact emotion or atmosphere can be a difficult job when all you have to create it is voice. So a round of applause for all seiyū out there! Good job, you guys. (Hmm…what are the chances they will stumble upon this blog post? But still I have to show my appreciation for these guys >.<)

P.S I only put the four girls’ picture on top of my post cuz they’re famous. Haha. But I’ve to say, I was surprise to find out Lucky Star’s Izumi Konata was voiced by Hirano Aya.

12 thoughts on “When A Seiyū Surprise You”