A few weeks into anime summer season, I’m seeing my to-watch list just grows insanely. It’s a bit scary since I don’t have the luxury of time to be watching everything that’s currently on my list. Of course, I have my strategy. The ones I really like I’ll watch them on weekly basis. The ones I like enough to be following but not crazy enough about them, then maybe I’ll gather a few episodes before watching them. Maybe two, three episodes? Or maybe more. I’m like ten episodes behind Hanasaku Iroha, but fear not for I shall catch up soon. I just need to buy a bag of popcorn and then wait till the weekend arrives. I hope this weekend’s weather is cool. I don’t like to marathon a series under a hot, humid weather. Note to self: buy popcorn. 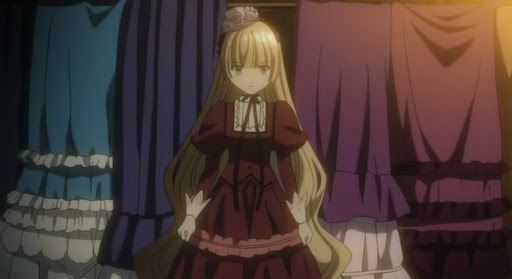 Usually, I pick my anime based a several reasons/conditions. Number one will always be great content by my standards. Who doesn’t like good, old story? In order to keep me interested, exciting plot is a must or for the case of slice-of-life anime, it has to be humorous, fun and well-paced. That way, I’ll be very dedicated and eagerly awaiting the next episode. For example, Gosick. The episodes were created in a way that it kept the audience guessing, and I daresay most of them will be parked in front of their machines right on time each week just to know what happens next. This goes to say that if any of the three shōnen anime, namely One Piece, Naruto and Fairy Tail (I betcha think I was going to say Bleach), I’m following is airing a so-so arc, I will wait till the arc is complete before picking it up again.

Number two, uniqueness. I suppose this is related to number one but I decided to put this as a different point cuz I’ve ended up following a few anime due to them being different than the usual ones. The one I could think off the top of my head is Durarara!! The concept is not new, but it’s rare. It can easily bring something refreshing to the table. I even like Bartender. It’s slice-of-life (undeniably my favorite genre) but instead of seeing high school girls joining clubs or going about doing their business, we see a bartender providing insights into multiple life situations. That’s my definition of unique, at being different. You can’t easily think of another similar anime.

Number three, the popularity of the anime. It’s the curiosity that bites here. Why is it such a hot sensation? How come I’m seeing its posters everywhere? Why are there so many of their figures? Is it really that good? Something like that. I picked up Lucky Star and K-ON! because their merchandises are all over the Internet. It’s hard to miss. It turns out, Lucky Star remains one of my favorite anime till this day. It’s something I can watch over and over again. On occasions, I’ll select a random episode and watch. Lovely. However, I must say for this point, there will always be exceptions. For example, Madoka in my opinion was the hottest sensation last anime season, but I couldn’t bring myself to watch it. I simply couldn’t get into the mood for magical girls. It’s one genre I find myself avoiding.

Number four, character designs and settings. There are so many examples for this but I’ll just use Ikoku Meiro no Croisée cuz it’s currently airing so it’s easier for you to get hold of an episode just to have a feel of what I’m trying to say. Yune’s designed wonderfully and the setting for the show is gorgeous. My eyes are glued to the monitor, taking in all the splendid artwork for the entire 20 minutes. Again, there are exceptions. A good example of the exception is Kuragehime. I managed to complete the series cuz there is a great story behind those ugly characters. And that’s point number one I’ve mentioned earlier.

Number five, the last reason/condition but not limited just these is good offers. Haha. I hope this doesn’t stunt you or anything. Hyakko, Love Hina and Bamboo Blade were on sales, which is why I picked them off the shelf. At the time, I didn’t know anything about this seasonal anime stuff. All I knew was they’re legally distributed and they’re on sale. Easy. Lucky for me, they turned out to be good. Unlucky for me, School Days gave me nightmares. Not literally though.

So, ladies and gentlemen, my dear readers, how do you pick yours?

32 thoughts on “How Do You Pick Your Anime?”