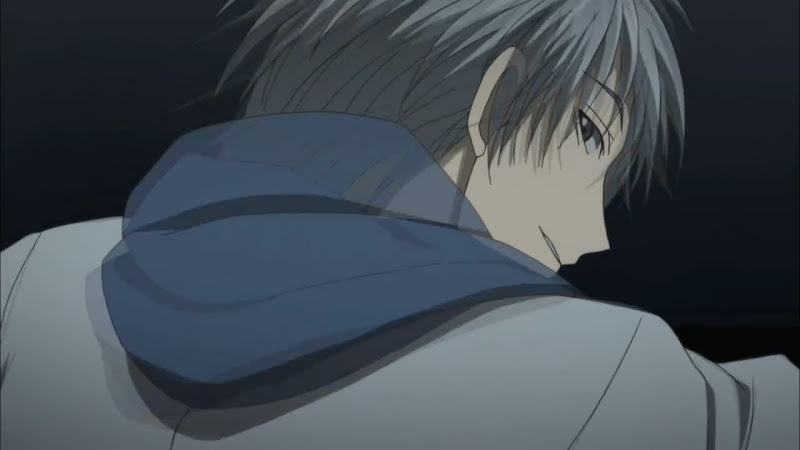 At first glance, Aki is someone others easily dislike. I’m pretty sure most viewers would agree. He’s unfriendly, cold, always wearing that evil smile, constantly threatening Kyohei and the list goes on. He was painted as a merciless mass murderer and it’s easy to see why. He showed nothing to suggest otherwise. He doesn’t get on my nerves, but he is the antagonist. He is the bad guy here. Needless to say, I don’t think well of him.

But watching the seventh episode of Kamisama Dolls changed all that.

Sure, Aki isn’t what anyone would consider a good boy. He has issues with fellow villagers and known to abandon animals halfway through (there were no evidence to prove that he killed those animals so I’ll treat that as solely rumors). He spent his days alone and no one can really get close to him. Not even Kyohei. He constantly spent his day looking at the sky, mind wondering off into a distant space. He doesn’t go to school like regular kids, further strengthening his image as a delinquent.

However, Aki has his soft side. A side that was hidden from the public but when he’s alone or with people he cares about, it emerged. For example, despite appearing being uninterested in taking care of Nono, he displayed affection and appeared to have enjoyed his time playing with the dog. This was witnessed by Moyako, who I believe fell for him at that moment. Besides that, he cares a lot about Senou-sensei, often seen getting lost in thoughts about her. In other words, Aki holds dear things that mattered to him. Nono mattered. Senou-sensei mattered. Kuramitsuha mattered. When all those were taken away, I’m not surprised that he snapped. His deepest and darkest desire exploded.

He thought about changing before, even if it’s only for the slightest moment. It’s a bit sad to see that he doesn’t believe he can change. The story of Kamisama Dolls isn’t over yet, so I’m hoping to see more of him and how he deals with the village should there be a second season. I think he will change to be a better person, with less hatred once he overcome the demons of his past.

In short, Aki is a boy with sad and touching past. He is just a little different from others. He was misunderstood. Poor boy.

P.S Despite seeing a different side of Aki and trying to understand his character, I still don’t agree he resorted to violence at his moment of grief.