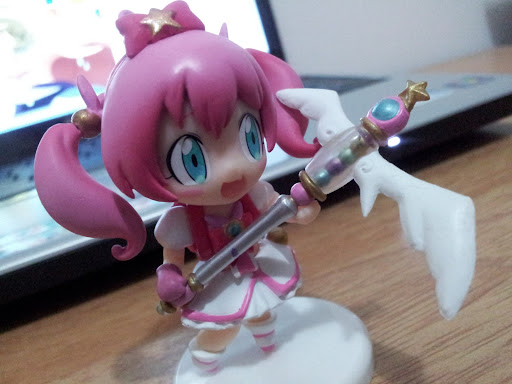 I’m a tiny bit curious here. Does anyone of you recognize her? She’s from a popular anime, but I don’t know if she is popular herself. Her die-hard fan and hater are super famous among anime fans – that I know for sure. I’m thinking she might be equally famous, which is why I’m asking you just to check if I’m correct.

Honestly, I wouldn’t recognize her…She happens to be with me here because I was playing with my luck. You see, I went to Singapore a few weeks ago and I wanted to visit The Anime House but I had trouble finding it. I asked a few people on the street where PoMo is and to my surprise a lot of them didn’t know. I eventually found it and decided to award myself with a random picking. She’s cheaper than a Nendoroid or a Figma or a T-Shirt or a mug or a….(the list goes on). The only problem? Because it’s in a sealed box, I won’t know which character I’ll get.

I think my luck is pretty bad that entire day so I ended up with a character I know the least of. I’ll never buy a sealed box figure again!