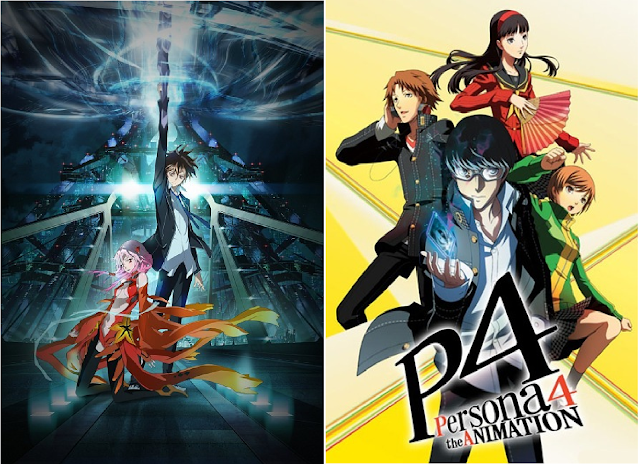 Looking at my watch list this season, interestingly there are two anime I have been faithfully following without that feeling of anticipation. You know, the happy feeling one has when a subbed episode is released. They aren’t particularly distasteful, but they aren’t thrilling either. Lukewarm is the word best describe how I feel about Persona 4: The Animation and Guilty Crown.

Persona 4: The Animation is what I consider a show with cool vibes. The colors, the style, the characters. It helps a lot that the anime is never short of comedic moments. Nonetheless, with so many episodes aired, I’m still wondering what this story is all about. In my opinion, I have trouble understanding Persona 4 because I have not played the game and therefore, I don’t really know what to expect. I haven’t read any other materials about it other than the normal episodic blog posts because I want to keep that element of surprise. I believe I made the right choice because I sure was surprised to learn the hidden secret of Naoto. So what is Persona 4 about? Is it really just a group of friends hanging out, catching bad guys or is there more than meets the eye? I really don’t know. It feels like Power Rangers for some part, Famous Five for the most part.

As for the other half of the two, I’ll admit that I’m absolutely blown away by the first episode. I was captivated by the beautiful artwork and that song – Euterpe. If I’m asked to rate “The Best First Episode”, Guilty Crown will definitely make the list. Unfortunately, after that awesome first episode, the rest failed to impress. In fact, Guilty Crown has gained a lot negative comments from the anime community. As I reflect on my thoughts on this anime, I came to the conclusion that I don’t hate nor am I disappointed with the series. Sure, the story is far from unique and didn’t live up to my expectation thus far and most likely never will but I can’t argue that the animation, artwork and music have been wonderfully kind to my eyes and ears.

Having written this post, I realize I have higher tolerance than I thought. Usually, when I don’t know what an anime’s trying to do I drop them. But then again, maybe Persona 4 and Guilty Crown aren’t that bad, which is why I stick around for as long as I did.

22 thoughts on “Watching Without Anticipation”