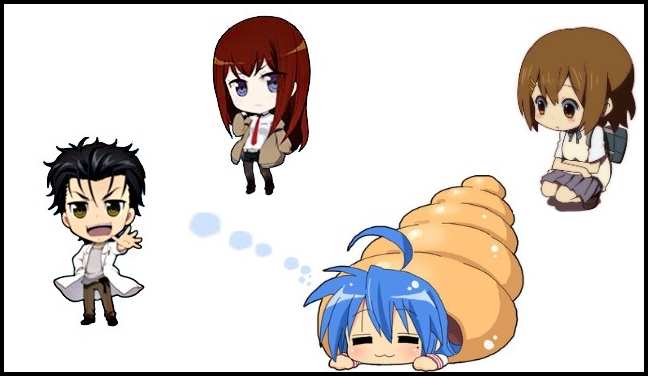 Pssst…I have something to tell you. Just a few days ago, Mr.Yerocha of Shades of Grey Production told me this anime plot I’m working on is green-lit. Yay! I’m so excited that I have to tell you guys about it.

Being the slice-of-fan that I am, this anime will revolve around four people and their daily lives in the society. I think there are a lot of school girls and boys anime so I’m trying to differentiate a little. By the way, they are neighbors in an apartment. My plot…wait. What plot? I don’t have one so let’s just forget about that. Why not take a look at my cast instead? I’m pretty sure you’re gonna love them.

In order to make the series lively, I’ve decided to have a wonka,  a klutz,  a technology otaku, and of course, a tsundere.

From the brief description of each of the characters above, I pretty sure you can imagine how crazy and fun this bunch of people can be. There’s a good mixture of personalities that will never fail to bring a smile to the face of viewers. Laughter is always in the air and that is something I look for when picking up an anime. Also, these characters have good deal of energy. I always like a cast that has constant movements, if you know what I mean.

Unfortunately, the whole project was cancelled due to copyright issues…

P.S. The characters listed in this post would make my ideal anime cast. I thought it’ll be fun to watch these four, with their personality intact, mingle with each other. Besides, they’re the best examples of the archetype they represent. The whole neighbor thingy is merely a setting  provided for you to imagine what will it be like when Okarin, Kona-chan, Yui and Kurisu interact with one another. Did it do your imagination any good?

P.P.S. While we’re at it, do check out the following entries:-