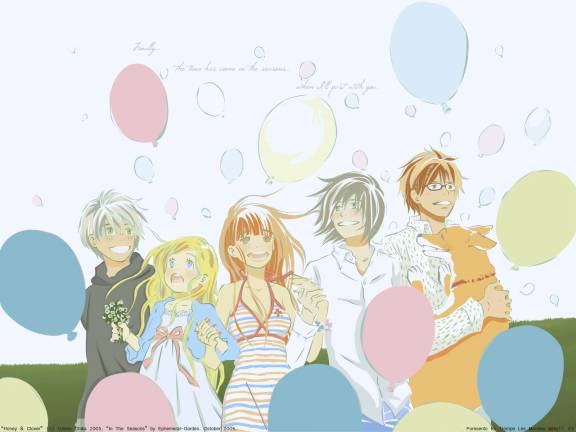 As a person who appreciates any form of art and enjoys watching romantic comedy, picking up Honey & Clover seems like an appropriate thing to do. Little did I know that this series spanning over two seasons have so much heartache. I started watching the first season sometime in the middle of last year, but it took me ages to complete the 24 episodes of it. It’s not that it’s boring. Well, the pace is a bit slow. Besides, I can’t bear to watch all the heartaches the characters were going through. Second season fares much better in terms of pacing, but still gosh…my heart breaks.

Before I go on any further, here’s a quick look at what Honey & Clover is about.

Yūta Takemoto, Takumi Mayama and Shinobu Morita are three young men who live in the same apartment complex and are students at an art college in Tokyo.

One day, they are introduced to Hagumi Hanamoto, the daughter of a cousin of Shūji Hanamoto, an art professor, who has come to live with Hanamoto and has become a first year art student at the art school that everyone attends. Yuta and Shinobu both fall in love with Hagu, but Yuta hides his feelings and tries to be a friend to Hagu while Shinobu expresses his love in ways that seem only to scare Hagu, such as calling her “Mousey” and constantly photographing her. Hagu herself, though initially timid and afraid of company, gradually warms up to the three.

The group comes to include Ayumi Yamada, a master of pottery who is well-known by her nickname “Tetsujin” (Iron Lady), who becomes very close to Hagu. When not at school, she helps run the family liquor store. While Ayumi is popular with many young men, she falls in love with Takumi, who does not recipocrate her feelings and considers her a very dear friend. Instead, Takumi pursues an older woman, Rika Harada, a widowed friend of Professor Hanamoto who runs an architecture studio she founded with her late husband.

The story follows these five characters in their love triangles, unrequited love, graduating from college, finding jobs, and learning more about themselves. 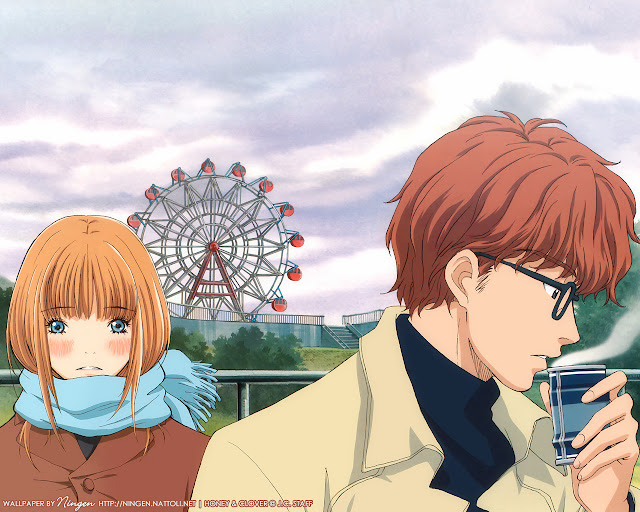 When I say heartbreaks, I don’t only mean in romantic relationships. But of course, the major heartbreaks in Honey & Clover are related to a series of unrequited love. There are so many love triangles that I lost count. Yamada’s case was the most heart-wrenching story of all.  She knows she has no future with Mayama as he has been very clear about his feelings for Rika. In spite of that, she continues to follow him, stays close to him. She’s even willing to work with Rika. Her emotional wounds were only cut deeper everytime she sees Mayama showing affections towards Rika. I don’t understand how she’s able to bear the disappointments and hurt, but there she is – forever chasing after Mayama.

And that is only one of the many love triangles in Honey & Clover. 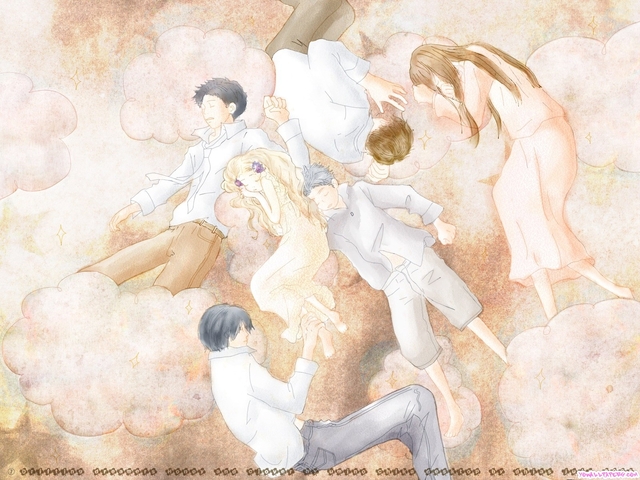 Yamada’s pain and Kaoru’s despair can’t even be compared to Hagu’s grief. All her life, the one thing she treasured the most is slipping through her fingers – her love and ability to draw. As an extremely talented and highly sought-after artist student, the injury to her dominant arm is a nightmare. The sense of loss, not knowing if she’s ever going to recover was painful to watch. However, I’m impressed by the fact she’s put up a brave front as an encouragement to herself and as not to burden those around her. You see, Hagu is a girl small in stature and is an introvert. She looks vulnerable and every part of her silently screams for protection from others. She is constantly shielded by those around her. It’s rare to see Hagu doing things on her own, except drawing. So to watch her go through the ordeal was a bit too much to bear.

Throughout the two seasons, Honey & Clover excels in arousing the emotions. I think I can feel the characters’ pain so much because they were well written and they are easy to relate to. All the characters in Honey & Clover felt real. I mean, they are these bunch of people who are going through the ups and downs in life I know most of us are going or have gone through. We question about our future, our relationships, the meaning and purpose of life. Life isn’t a bed of roses. Honey & Clover showed us just that.

14 thoughts on “Heartbreaks in Honey & Clover”