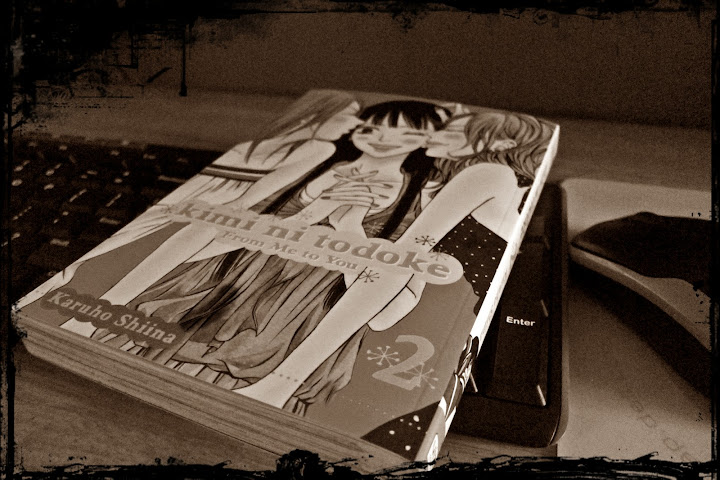 Rumors start flying about Sadako’s new friends claiming that Yano’s been around the block and Yoshida’s a former gang member. And the source of all this tattle? Sadako herself! Will Sadako retreat to her former life as a loner because of a simple misunderstand?!

Following the events that happened in Volume 1, this volume served to explore the truth in rumors spreading quickly around the school. Whether or not it is Sawako who spread the rumor, that is. I think readers would’ve already realized there’s no truth in the rumors about Ayane and Chizu. The rumors sparked a series of misunderstandings between Ayane, Chizu and Sawako, threatened to wreck Sawako’s newfound friendships.

That said, the four chapters in Volume 2 talked about friendships. Not just friendships between Ayane, Chizu and Sawako, but also Chizu’s friendship with Ryu as well as Sawako and Kazehaya’s friendship.

I’ll first talk about Ryu and Chizu’s friendship. We’ve seen a lot of childhood friends in anime or manga, haven’t we? Ryu and Chizu aren’t any different so why am I such a huge fan of theirs? After reading this volume, I think it’s because their friendship has always been caring, supportive and sweet. Ryu stood by Chizu when she was confused and worried about her situation with Sawako. He didn’t give the best advice. He simply only showed that he cared. In return, Chizu included Ryu in the loop of all her activities. Meaning to say, whether or not she hung out with Ryu doesn’t matter – at the end of the day, Ryu will know everything anyway. There’s this strong sense of trust between these two friends. They don’t need words to express their concerns and emotions. One look at each other, they’ll know what’s wrong and what’s right. At least, this applies to Ryu.

Moving on to Sawako and Kazehaya’s friendship. Despite Kazehaya’s growing attraction to Sawako, he had remained as a supportive friend to Sawako throughout this ordeal. He had pulled her out of her misery and set the path right for her. If I may, I’ll say Kazehaya is the light when Sawako’s going through her darkest days. He simply doesn’t know when to give up. Of course, we can all say it’s because Kazehaya couldn’t stand a classmate not fitting with the rest. But seriously, he has always been there for Sawako. It’s funny how she never thought of wanting to be his friend (in her context). She only thought about Ayane and Chizu. Poor Kazehaya. I wonder how he felt…

Now to the highlight of this volume – the friendship between Ayane, Chizu and Sawako. I always thought things would’ve been a lot simpler if the correct questions were asked and there’s a universal definition for the term “friend”. The questions Chizu asked Sawako were vague and open for interpretations. She didn’t even bother to listen to Sawako’s full answer. To be fair, if correct questions were asked and Sawako didn’t over-analyze the word “friend”, then we’ll probably won’t be able to see the painful but sweet development of a new friendship. One can tell how much Sawako treasures her first friends. Oh, she’s so cute when she embarked on one of her little missions to find out who was the one who started the rumor. Anyway, one thing I like about those girls is they always seek to clarify things. It’s really a good thing to do. Instead of assuming things and live with their own assumptions, they ask directly. It’s a risky action if you ask me because things can break with question of doubts. But it’s something I’d rather do, and I’m glad they do too.

As I began to think why Sawako went through all those troubles for Ayane and Chizu, I sensed that she was indeed a very strong girl. Much stronger than anyone else in the series. On her own strong will and with a little push from Kazehaya, she had overcome a difficult wall and found herself friends for life (I hope).