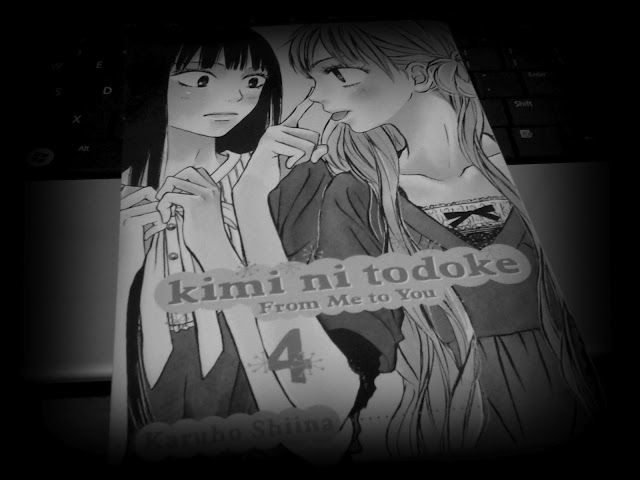 Kurumi’s got it all – looks, popularity and friends. But underneath Kurumi’s friendly exterior is a manipulative girl who’ll do anythign to get what she wants! And she wants Kazehaya! Will Kurumi’s plotting drive Kazehaya and Sawako apart, or will it instead draw them even closer together?

I remember this is when I started to like Kurumi. She looks so adorable when she gets irritated by Sawako’s denseness. If I’m in her shoe, I think I too cannot stand Sawako’s inability to read the situation. But then again, this is Sawako we’re talking about. No one in their right mind can hate the girl. She’s just too sweet.

For once, what’s going on with Sawako doesn’t feel as important as the things that are happening around Kurumi. It’s terrible. Her reputation as the nice, cute girl is slipping away. She’s struggling to get Kazehaya’s attention. She’s struggling to get Sawako to do things her way. She’s gotten herself into an unexpected (hilarious) misunderstanding with Pin. Her dirty tricks are slowly uncovered by Ayane. Everything she worked hard for since middle school is slowly taken away from her. Little by little.

While things are taking a positive turn for Sawako, Kurumi has the opposite thrown her way. I’m always on Sawako’s side, but it’s hard not to take notice of Kurumi. She takes centre stage in this volume. Throughout the five chapters, it’s interesting to see how Kurumi deals with all things that’d gone wrong for her. I think she’s very smart. To be honest, I can’t believe how she quickly think of a plan to make use of “Ryu’s the hero” story to trick Kazehaya into believing Sawako likes Ryu. I’m actually impressed she’s able to write a “love letter” and then set up Sawako to meet with Ryu in such a short notice. This is when I started to like Kurumi – she’s unbelievably smart. >.<

As the chapters continue, Kurumi’s fake exterior of a sweet girl slowly vanishes. A vulnerable side of her emerged. Things had gone  terribly wrong in her plan in such a short period of time. She’d planned and made sure Kazehaya remained unattached for far too long, but it’s falling apart. That’s the kind of feeling I never want to feel. The kind of feeling in which we no longer comprehend what’s going around us and are helpless. The control she once had is slipping through her fingers. It’s no wonder she’s unable to suppress her true colors. She had enough and decided it’s best she stops pretending.

I think it takes a lot of courage to admit a mistake, and a lot more to give up on something she’s hold on to. While she hasn’t given up her feelings for Kazehaya, she’s given up trying to stop what she knows eventually will happen. Kurumi’s brave to finally willing to show her real self to other people (her real self rocks, by the way). I’d like to think that Kurumi will not be the manipulative person she is if it wasn’t for Kazehaya. But then again, I like Kurumi just the way she is.

For those who’ve read this volume or seen the episodes, do you think Kurumi could be different if she hasn’t fallen in love with Kazehaya?