Since the beginning of human-eating bug crisis, it’s interesting to see how much Gon and Killua had grown, in terms of raw strength, emotional strength and their friendship. I remember saying (tweeted?) that I couldn’t imagine Gon and Killua apart. And much had happened since then.

For starters, since Chimera Ant arc started, I’ve almost forgotten about Hisoka and Phantom Troupe. And then, since the latest arc started for the anime 2011 version, my impression of Hunter X Hunter has changed quite dramatically. If you ask me now, I’ll say the show is giving me nightmares (not literally) with its gruesome, highly evolved ants that hardly look likes the ants I frequently stamp.

Back when I first wrote about Hunter X Hunter here, Gon was a cheerful, overly positive young kid with a single-minded determination to seek his dad. He set out on an adventure, overcoming all sorts of mental and physical hurdles, all for the sake of his one goal. Even when he encountered all the difficulties and adversities, Gon pretty much maintained a cheerful demeanor and remained mostly harmless.

Because he wanted to find his dad so bad, he was glad to have found Kite, someone who may or may not lead him to finally meet his dad. During their brief time together, Kite has been a great mentor and friend. As I said, their time together was short, his newfound friend was taken by the ants. During this period, Gon vowed to be stronger so that he could rescue Kite. His personality pretty much remained the same – he grew stronger, thanks to his immense talent and perseverance. Guess what, Gon even managed to sneak in some romantic time with Palm. 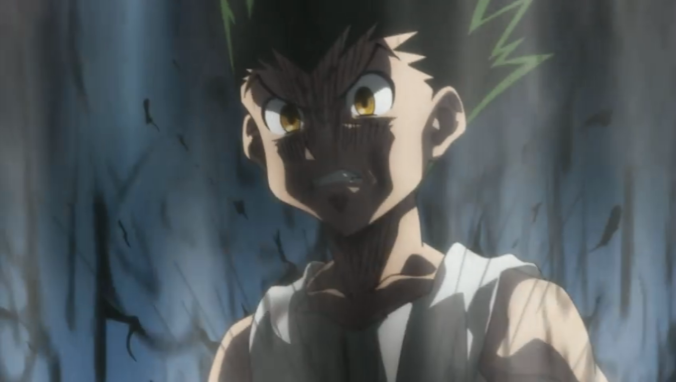 However, it’s as if something suddenly snapped, Gon turned into someone who is dark with vengeance. When they set out on their final mission, he still is the Gon I knew. The moment he tracked down Pitou, Gon changed. He turned into another person, a character I thought I barely knew. He was angry, merciless and demanding. His kind heart vanished and was replaced with murderous intention.

What I imagined would be a long and tough fight for Gon vs. Pitou turned out to be pretty one-sided. The way Gon charged forward was un-Gon like. He didn’t just want to win a match, he wanted to kill his opponent.

To me, that’s a really big change in Gon, a boy I’m so used to seeing being more of a person who’s fond of winning but not killing. I’m pretty sure in future, I’ll always be more weary of him as who knew, Gon has a dark side too. 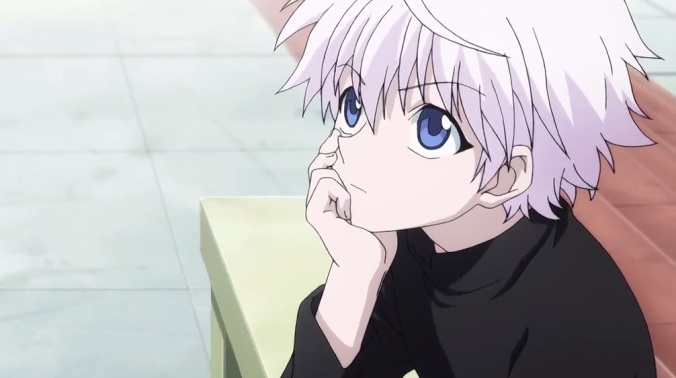 On contrary, Killua has always been dark with a few emotional battles of his own. He never truly opened to anyone until he met Gon. In terms of skill set, Killua surpassed Gon in more ways than one. The only thing perhaps Gon does better is his ability to communicate with animals. From the very beginning, Killua is surrounded by dark aura. He has a dark side; everyone can see that. If he was the person in the battle with Pitou, I wouldn’t be surprised at all.

Over the course of the series thus far, Killua is slowly shedding his inner darkness and overcoming emotional distress just so he could be called fit to be Gon’s partner. That’s how much his friend meant to him.

As opposed to the darkness that had shrouded Gon in recent episodes, Killua pretty much has none of it. Perhaps this isn’t his battle, as Gon has mentioned. Perhaps he wasn’t as affected because he wasn’t as attached to Kite as Gon was. In fact, he’s gradually becoming Gon, in a good way, learning to lean on friends. When the series first started, it’s a little hard to imagine Killua uttering word like “Friend”, much less depending on them. While he treasures Gon very much, Killua rarely verbally expressed it. So for him to verbally appreciate Palm and Ikalgo is something rather new. 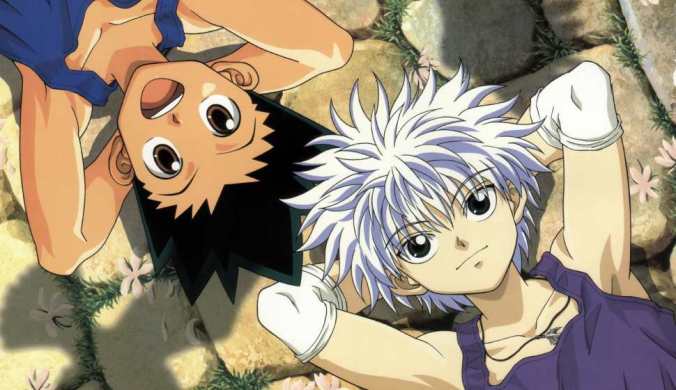 Personally, I think it’s a huge contrast on what has happened to Gon and Killua recently. It’s like they’ve momentarily switched characters, in the process giving their characters more dimensions. It’s also a stark reminder that everyone has their good sides and their dark sides. While it seems they’re mostly fighting battles on their own, in a way linked by unforeseen forces, they are also fighting side by side.

For the most part, I still can’t imagine Gon and Killua apart because they are the essence of the show. Without these two characters as best buddies, Hunter X Hunter is nothing. The show cannot exist with only Gon or only Killua. They balance each other. That’s how I see it. What about you?